It’s been a minute — longer than I had expected, as the inaugural issue of Startling Stories has been delayed and I haven’t had much else to report in the way of fiction-related developments. I do prospectively have another story slated to come out at this point, but I’d rather not make the details fully public until there is a little more movement on that front. While I can’t imagine that there are many out there reading this, I wanted to post something to let those curious (or those stumbling by due to coincidence of keyword) know that I hadn’t disappeared off into the ether.

I suppose the one semi-significant development at M. Stern Headquarters is the creation of my Facebook author page, which I encourage you to “Like” if you haven’t already. The news has been, of course, really slow over there as well, but I’ve been posting interesting music clips from time to time in lieu of any substantial updates. 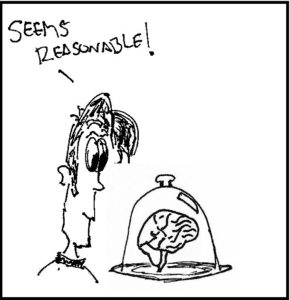 A note on the title of this post — it is a reference to the weird work of German pseudoscience from the 1970s, “Der Anfang war das Ende,” which translates to The Beginning was the End, subtitled: “der Mensch enstand durch Kannibalismus – Intelligenz ist essbar,” meaning roughly, the human emerged through cannibalism — intelligence is edible. Of course this may be more familiar to some as a lyric from the Devo track Gates of Steel, and in fact the synth pop band’s shtick was highly influenced by the book, especially in their early days as a more experimental, conceptually challenging act.

The book was written by a fascinating New Age-y type named Oskar Kiss Maerth (nutbar or grifter to some, OKM to his friends and/or adherents), and details the entirely baseless but nevertheless compelling idea that the mechanism which drove human evolution was cannibalism among apes. Maerth, having purportedly eaten some monkey brains while traveling through southeast Asia, concluded that consuming brains increased the sexual potency and the intelligence of the eater. In our pre-human history, some apes stumbled onto this, which sent them off eating each other’s brains at scale. They got smarter, ate more brains, and climbed up the evolutionary ladder to the top of the food chain where we now reside. These days we fail to eat each other’s brains in most cases, but are the beneficiaries of our cannibalistic progenitors’ lack of scruples.

For those who can understand German, here is some footage from German television of Maerth hanging out in a monastery in Asia wearing long flowing robes, surrounded by children and delicious monkeys.

When I initially had planned this blog entry I’d intended to also explore a theorist of consciousness whose ideas I take quite a bit more seriously than Maerth’s, Julian Jaynes, but I honestly don’t know if “idea blogging” still exists in the way it did say a decade ago. Have all those think-piece writers of the early Web 2.0 era become podcasters now? I barely pay attention.

I’m also still considering putting a review or two of some of the art house and b-horror/exploitation stuff I watch up here, but while I certainly love writing that sort of thing I find that there are people and websites out there capable of doing it more comprehensively. Plus, this is here primarily for people to explore what I’m doing in terms of my work as an author, which I consider to be a separate kind of thing from criticism.

At any rate, hopefully I’ll have some actual news soon — I have actually just in the past few months been writing stories at an unprecedented (for me) clip, but I have never been one to talk about things as I’m working on them or to discuss the submission process. I suppose I am old-fashioned in the sense that I don’t like to pull back the curtain too much.

Hope anyone who is reading this is enjoying their summer. Be safe and don’t engage in cannibalism — it hasn’t been proven to make anyone smarter, but it can definitely lead to kuru.
-M.