Happy to say I just signed the contract on another story with Write Ahead/The Future Looms, and my story “Memories of Emma” is slated to appear in their pages. Get ready for more action! More poetry! More anxiety! And more punk of the cyber variety! Keep your eyes glued to this window for more news, and/or follow me on Facebook to stay up to date on the latest developments. Take care everyone!
-M.

Just a quick note to let everyone know that the e-book version of Startling Stories is now available at Amazon, Check it out and dig in! And if you get a kick out of my story, follow me on Facebook to get up-to-the-minute news on the latest MSternian goings on.
-M.

Excited to say that my Pnakotic Pnostman dropped off a copy of Lovecraftiana: The Magazine of Eldritch Horror Candlemas 2021 Edition in the mail! We’ve got oft anthologized veteran U.K. horror/SF author/poet and Beat poet scholar Bryn Fortey and Chaosium editor/prolific purveyor of modern Mythos fiction Glynn Owen Barrass on the cover, and here’s a tiny glimpse of what you’ll find inside from yours truly: 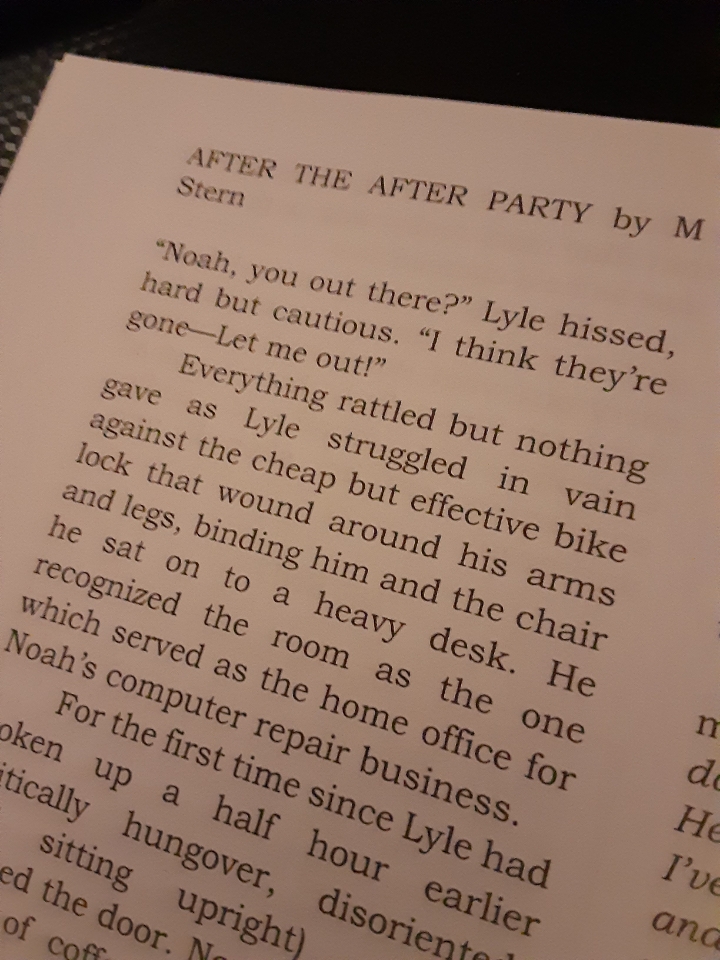 The day has finally arrived – the long anticipated first issue of the relaunched Startling Stories from Wildside Press, edited by Doug Draa, is out in paperback and available on Amazon (and with, as you can see, a different cover than the prospective one that was floating around early last year). This relaunch of the classic pulp science fiction magazine contains my science fiction story “Payload” alongside a bunch of other cool brand new stories, not to mention a ‘50s one by Silverberg (a story which was, from what I understand, written originally for the classic incarnation of the mag).

I had a whole big blog planned exploring the ins-and-outs of “Payload.” Firstly because I do believe that, as a story about intertwining and mutating varieties of contagion, it’s more germane to the world as it now looks – in the midst of a pandemic with one or perhaps numerous infodemics happening alongside it – than it would have been had it run closer to when I had written it. In fact I think the story probably speaks more to the experience of living through a pandemic in a technologically advanced society than it would have had I written something more immediately, directly recognizable as a piece of pandemic fiction. Secondly, waiting for a long time for something gives you a lot of time to think about it. And boy have I thought.

So I could honestly probably talk for an hour or two about this one – about its Ballardian (I think?) vibe and where that might fit in the context of Campbell-era of science fiction, about the approach to virology and epidemiology and how that might have changed given that concepts like spike proteins and adenoviral vectors are now, bizarrely, part of the common parlance, and about a million other aspects of this story. Some parts of it have a long, long history in my brain, despite it all having come together, as these thing sometimes do, rather quickly. But in attempting to write such a blog I found that I was just asking myself questions that I hadn’t been asked and then answering them, which felt sort of silly. More importantly, as I’ve said elsewhere, it’s a story not a philosophical treatise – one that I hope will keep people guessing and deliver some entertaining thrills more than anything. So check it out and get Startled!

And if you want more M. Stern in your head…
Earlier this week my cosmic horror-comedy “After the After Party” — a story with quite a different sensibility than “Payload” — made its appearance in Lovecraftiana: The Magazine of Eldritch Horror. Check it out in print or e-book, as nothing goes down better after an M. Stern story than an M. Stern chaser, so they say. “They” being, in this case, me. Anyway take care everyone, stay safe.
-M.

Wishing a belated Happy New Year to all of you! I Just got word a little bit ago that my story titled “After the After Party” has arrived in print (and Kindle format) in Lovecraftiana: The Magazine of Eldritch Horror. This story is sort of a funny one, I’ve described it as having the sensibility of sort of a madcap rom-com — so what can you expect? Self delusion! Quixotic romance! Weird intrigue! Arcane rituals! People acting like assholes! References to the classics! Gloppy monsters! And a touch of existential fear and trembling — what would cosmic horror be without it, right?

Sound like your kind of thing? Head on over to Amazon and snag a copy, and I hope you mythos mavens and weird horror aficionados get a kick out of this one. Follow me on Facebook for more updates, not to mention brief thoughts on technological miscellany, songs I like, and whatever else I post when the spirit moves me.

And speaking of updates …

A new way to get your M. Stern fix
The duo over at cyberpunk mag Write Ahead/The Future Looms have launched a “digital news-stand” for the purchase of individual digital issues. That means if you haven’t grabbed Vol. 11. yet, featuring my story “Head on the Door” and you want something to cool to read on your electronic device of choice — or are yourself a cyborg and are capable of downloading ebooks directly to your brain — you can now get the entire issue for a mere 3 pounds sterling (or whatever that converts to in your preferred currency).

If it is at all helpful in driving this micro-transaction, I said somewhere else that the moral of “Head on the Door” is that anyone can break your skull but only you can break your heart — an aphorism I believe to be no less true now than I did like three months ago when I made it up.

Anyway hope everyone is holding up out there, take care and stay safe!
-M.