Happy New Year, or belated New Year I guess. While developments have continued to be a bit slow-going, they have indeed been developing and so I wanted to post a quick update to get everyone hip to the latest goings on as they get going.

Preparing to be Startled with Startling Stories #1
Back in November I received a much appreciated surprise email from editor Doug Draa containing the galley proofs for issue #1 of the relaunched Startling Stories, indicating that go-time was approaching. I ran through my edits and sent them back, knowing now that I bear the full existential weight of any typos which may appear in my story, but content that the hotly-anticipated Startling Stories #1 is getting ready to bust onto the scene ray guns a’blazin’ (Disclaimer: my story, Payload, features no ray guns). Not only that, but as Mr. Draa has mentioned elsewhere, science fiction legend Robert Silverberg joined on at the last minute with a previously unpublished story which will appear in the mag.

Though a firm release date has yet to be made public, the consensus appears to be that it’s coming quite soon, with the good people at Wildside Press making mention of it in their 2019 year-end newsletter. And while it has yet to be posted on the public Startling Stories Facebook page, there is in fact some cover art ready for the issue that has been floating around in various channels, so I’m posting it below: 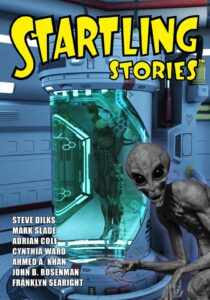 I have to say my jaw dropped when I saw this artwork, as I think this merging of a classic pulp vibe with some contemporary design elements is hot enough to turn the ice cold vacuum of space into a balmy island paradise.

I also can’t help but feel a connection with the events unfolding in the image. Like the fellow suspended in goo there, his blood presumably replaced with onax (a la Stanislaw Lem’s Fiasco) to prevent him from exploding like a ripe watermelon dropped from a rooftop due to the conditions of deep space, I’ve felt like I’ve been in stasis for some time. And that grey creepin’ around there, what is its agenda? Is it planning to plant a bunch of alien eggs in my brain? Shut off my life support just for shits? Steer me to the portal to hell from Event Horizon and leave me babbling in Latin and gouging my eyes out? Or does it want to be friends? Does it plan to unfreeze me in order to bring me to a super fun alien party?

Anyway now that I’ve extended this metaphor far beyond where I should have stopped, I’ll talk about how I should, at some point in the future, be …

Gettin’ Weird with Weirdbook
Due to the delays I’ve been hesitant to talk much about this one, but as things seem to be cranking up I figured it couldn’t hurt to mention that sometime last year I signed a contract on my story titled Birth, which is slated to appear in Weirdbook #44. While issue #41 of that magazine has been out for a minute, it sounds as though things are also starting to pick back up in terms of the publishing schedule over there, as it was made public over at Black Gate that Weirdbook #42 is in the hopper, and is going to be an issue entirely dedicated to stories by cyberpunk legend John Shirley.

As with my story coming out in Startling, I am feeling a strong impulse to talk about the one appearing in Weirdbook, but it doesn’t make much sense for an author to go around spoilering his own stories. I’ll move on to other stuff, then.

Other Stuff, Then …
What else is popping at M. Stern Headquarters? In addition to a few stories I whipped up towards the end of last year, some which I think are kind of funny and others pretty serious, I’m working on about three right now which fall I think into those same categories or somewhere in between.

Elsewhere in the offing I’m supposed to appear on an awesome horror movie podcast where I’ll be discussing (as it currently stands) the heyday of Italian horror/gore movies, how this gritty cinematic underground connects to and interacts with the art house tradition, and probably a bunch of other stuff.

And in keeping with that, I’ve officially decided that I will start doing some movie capsule reviews here as it seems sort of silly not to. I’ve got flicks by Alan Renais, Alexei German, and on the other side of the snooty spectrum, Joe D’Amato and Claudio Fragasso that I’ve got a thing or two to say about.

All this and more planned for after Startling #1 drops… Now I’m going to wrestle myself away from my keyboard and try to stop refreshing social media for at least a couple of minutes.