It’s been another couple of weeks over here at M. Stern Headquarters where the news is coming in faster than I can post it! Yowza! That could speak more to my blog updating pace than anything, but there have indeed been a few of pretty cool developments lately (most of which I have mentioned over on Facebook, where you should follow me if you’re digging what I’m writing!). Anyway here’s a quick run through: 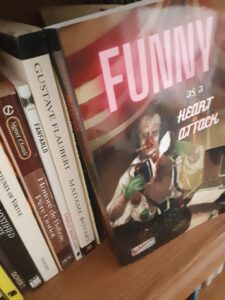 Gus is the most famous clown in a clowntastic, clowntabulous world. He is a big deal. A legend, even. Something, though, has started to change — things feel like they are getting meaner, angrier, darker. And while he can’t quite put his finger on how, Gus is beginning to suspect that he might have something to do with the whole world’s decline and fall into madness.

If you like your cosmic horror with a hefty dose of madcap, slapstick comedy (and a bunch of other stuff I won’t spoiler you on), you’re not going to want to miss this one. Whether you love clowns or hate them or even if you are indifferent about them.

Also, though it’s a little difficult to capture with my limited photographic resources, the trade paperback format looks nice as hell if you want one of these in print. There is no particular reason that I can think of that I have this one sitting near the section of my book shelf for French literature in the picture. Though there are mentions of a few famous French clowns in the story here and there, so perhaps I made a subconscious connection of some sort. And I’m not 100 percent sure but I think Schlock! Publishing might be based in France. Synchronicity abounds! Speaking of which …

More on what you can expect from that story to come in the future, but I should first note for those just swinging by that this will be my second story to appear in Lovecraftiana. The first — “After the After Party” — is still available in the Candlemas 2021 issue, if you want to check out that wild romp of a cosmic horror-comedy. “After Party” is quite a different animal from the thundering, lumbering, howling, hallucinogenic beast of a Cthulhu Mythos tale that is “Worms” — but it’s worth a read while you wait! Trust me, you’ll never listen to Mozart’s The Magic Flute the same way again after reading that one. Hit that link if it sounds like your thing, and if you have Kindle Unlimited — a service that I don’t even know what it is — you can snag that Candlemas issue for the low price of $0.00. 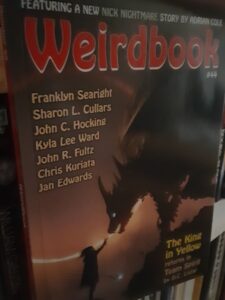 It’s a damn nice looking volume, with a table of contents brimming with all different walks of weird fiction to inject into your brain by way of your eyes.

If you want to pick this puppy up, the physical version should be available wherever weirder books are sold — and that includes Bucket o’ Blood Books and Records, one of the coolest independent book and record stores on the planet. Just give them a holler on Facebook and let them know you want one and, you can get your weird on without donating too much of your hard-earned cash to Jeff Bezos’ next trip to outer space. If you want it on Kindle, I think the e-book version should be dropping at some point in the near future. I’ll let you know.

Anyway time for me to go write some words elsewhere so that I can read some other words after that. Take care everyone!
-M.