It’s been a minute since I’ve written anything about horror movies but this all struck me as worth delving into this morning (I’ll also be sharing it over on Facebook). Maybe this means Halloween is officially on the way. Anyway. 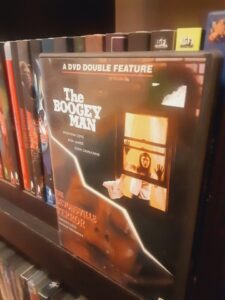 The other day I happened to see an interview with the late Ulli Lommel on a documentary I was watching and it got me poking around online, and I’m seeing some reports that Boogeyman: Reincarnation is set for a 2022 release. I’d really like to see this happen and I am wondering if the release date is legit. The original Boogeyman was Lommel’s contribution to the early-’80s slasher boom and made the Video Nasties list at that time. It was out of print and hard to find for a long time and I ended up finally getting a DVD copy and seeing it about eight years ago. While it tends to get dismissed as an also-ran, I think it’s got more going on than it gets credit for. Lommel brings to the supernatural slasher a surrealist’s preoccupation with mirrors, very specific Freudianisms that seem to show up all over the place in Lommel’s horror movies, and some other stuff that lends an idiosyncratic, auteur-esque vibe to the flick, albeit a slight one. I don’t know if I would say this all necessarily sets the movie above a lot of the other mid-rung body count flicks of the era so much as it sets it apart from them, and it does make it worth a watch or two.

A few years ago when I heard news that Lommel was going to be directing a new episode in the franchise, it struck me as a fascinating prospect. It’s nice to see old creative works have their internal mythology actually extended by the creators, as an alternative to the reboot-mania that was sweeping horror a while back, and I especially like the idea of something as under-the-radar and low budget as Boogeyman getting a new chapter added to it (while in 2016, when news originally broke about Boogeyman: Reincarnation, was a little early for this type of thing, we are starting to see more such labors of love actually get wrapped nowadays — the upcoming Mutilator 2 being a prime example). Thematically, it also struck me that Boogeyman had a particularly apt conceit for the era in which it was to be revived. There is an aspect of “virality” to how the violent supernatural force spreads itself around in the original movie. I cannot imagine that contemporary resonance was lost on the director.

Sadly, Lommel died during the filming of Boogeyman: Reincarnation, which from what I understand may have also been planned as a multi-part anthology show (and again, given how the murderous force “jumps,” I think that could have made a uniquely good fit). I assumed that meant it was going to be a shelved project, which struck me at the time as really unfortunate. While I guess in his later years Lommel was directing no-budget direct-to-DVD movies that weren’t particularly well received (or from what I understand, particularly watchable, I haven’t seen them so I can’t say) between the thriving indie horror festival circuit of the immediate pre-pandemic world and the explosion of streaming content happening alongside it, it seemed like the perfect time and environment for a bit of a Lommel rediscovery, if not an outright Lommelpalooza.

That last phrase, by the way, is one I came up with during my last planned run at doing a series of Halloween horror movie reviews which did not materialize. Early in the pandemic I picked up the Vinegar Syndrome Blu-Ray of Lommel’s Olivia AKA Prozzie, which got me thinking about his work again. I like artists who “bridge” scenes in a particular way (those who have seen Olivia may appreciate an unavoidable bad pun there) and Lommel certainly did that. He was all over the place — getting his start appearing in the early films of Rainer Werner Fassbinder in Germany, hanging out with the Warhol set in NYC in the mid-’70s and then taking the plunge into genre filmmaking (at one point even finding his way to Wisconsin to make movies in Bill Rebane territory). Not a career path you hear about every day and one I might write more about if I do continue writing about horror movies in any capacity.

At any rate, you may hear more news and thoughts about Boogeyman: Reincarnation here if, indeed, it is on the way in the near future and the tentative release date I’ve seen is not merely a well-propagated glitch.

P.S., since this is my author blog and all, I should mention that you can read my new science fiction/horror story A DAZZLING WORLD in the just-released xenobiology anthology from JayHenge Publishing, and pick up my irreverent Lovecraftian rom-com AFTER THE AFTER PARTY reprinted in the Lovecraftiana: Magazine of Eldritch Horror Omnibus Edition #5. Both available at those links in any format you could hope for (besides maybe a scroll). Get into ’em!

Happy to say that my new story A DAZZLING WORLD is now available in the new anthology from JayHenge Publishing, Professor Feiff’s Compleat Pocket Guide to Xenobiology for the Galactic Traveller on the Move. You can see the cover of the anthology below. Good stuff!

What can you expect from this archaically-titled tome? My story is a work of grim if colorful sci-fi horror about an insect not generally regarded as scary, and about the spirit of the Age of Reason giving birth to its obsessive obverse — I think? Check it out and judge for yourself!

And you can also dig the work of a wide array of other contemporary authors exploring weird flora and weird fauna from this planet and beyond — I haven’t checked out any of the other stories yet but I can only imagine there are some wild ones.

As I mentioned before, I am super excited to be appearing in a JayHenge anthology for the first time — I strongly encourage you to pick this one up right here, in whatever format you so desire and see what it’s all about.

Spent the wee hours of the morning wrestling with WordPress to make this post happen and now it’s time to get my day started. More news should be on the way soon, take care everyone!
-M.

It’s been a very busy and once again unremittingly hot week over here at M. Stern Headquarters, so I am just now sufficiently hydrated (mostly with coffee, but hey liquid is liquid as they say) and getting around to posting this update.

I’m happy to share that I got a couple of acceptances last month and now that the contracts are all signed I can spread the news. First off, my short story SONG TO… will be appearing in the upcoming cosmic horror anthology Strange Aeon: Hopeful Monsters, the third in a yearly series by MKeaton Presents.

And my short story A DAZZLING WORLD will be appearing in the Enlightenmentishly-titled anthology of weird flora and fauna forthcoming from JayHenge Publishing, Professor Feiff’s Compleat Pocket Guide to Xenobiology for the Galactic Traveller on the Move.

I’m thrilled to be in both of these and can’t wait for them to hit the shelves — more updates to come on these ones here (and over on Facebook) as things develop.